Starting with the bad words (I mean negative news), I give you another ‘latest news (I haven’t read)’ snapshot from Folha. 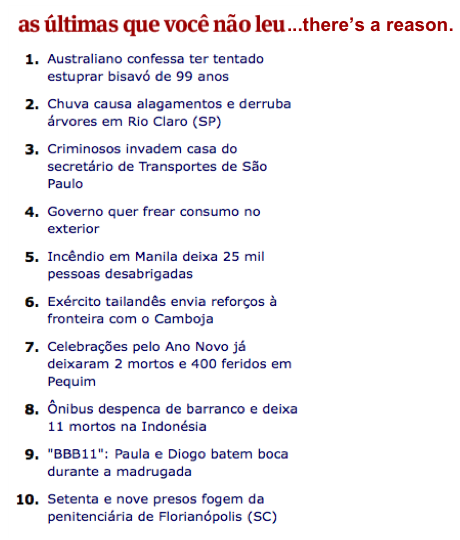 And then there’s the new words, which aren’t many. Pinga-pinga is the same as ônibus (bus), only it’s apparently the kind that always is stopping to pick up more passengers (source). Second, ‘Gre-Nal’, the nickname for matches between Grêmio and Sport Club International, both from Porto Alegre (source). Seemingly on par with a ‘Fla-Flu’ (Flamengo vs. Fluminense) match, though I’ve never been to a soccer game, so what do I know? For a second, I almost thought ‘Gre-Nal’ when spoken was grená (source), or a dark red color, but the context didn’t fit.