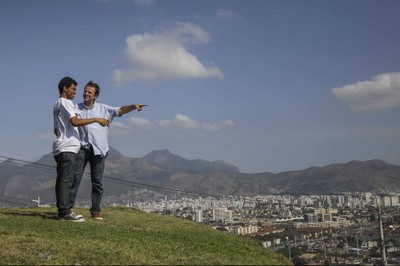 “I’m an optimist. Time and again, despite my age, I still have flashes of utopic hope of a more dignified life for the Carioca.

One of these rare moments from last weekend.

What happened was the following: the State Government considers that some favelas in Rio are pacified. Without a trace of the old drug traffickers or militia that, in fact, governed the communities. Among them are the favelas that make up the Complexo do Alemão. Cabral — and his Secretary of Safety — consider the region “pacified”, free from the truculence of traffickers. A sad untruth. In spite of the existing UPP in Alemão, the NGO AfroReggae received orders from the traffickers to close out their activities at the community center there, which benefited 350 children, with art workshops at the principal activity.

While the State Government kept mum on the announcement that the NGO would stop operating in the favela, the mayor Eduardo Paes personally went to the location and said the Mayor’s Office would assume all of AfroReggae’s activities, with an attitude that I would define as “macho”. He personally confronted the orders of the traffickers. And even donated some land to Renê Silva, responsible for the newspaper Voz da Comunidade, to rebuild the new headquarters. The old one was located in the AfroReggae building and was burned down in an act that until now is considered criminal by the NGO’s directors.

Paes was also elegant. He said the pacification process of Alemão wouldn’t reverse, an affirmation that should have been made by those responsible for the security of the State, or rather, the governor. It was a way he found that wouldn’t leave Cabral in an uncomfortable situation.

“Paes’ political bravado” is what the political adversaries of the Mayor’s Office, of which I include myself, might say. It may be. But he fulfilled a role that’s of an authority: he went to the place of conflict and invoked the power given him. If he is going to manage to keep this attitude or not, we will see in the next few weeks.

The quick action of Eduardo Paes as a constituted authority imposing itself is encouraging. Leaving his office to show his face in a conflict zone should be common in a democracy. Paes inaugurated the posture of a statesman of Rio. One point for him.” – CartaCapital (PT)