It isn’t widely known among non-Brazilians what the capital of Brazil is, but as my personal interests lie in history, I’m going to go over the three Brazilian national capitals since its “discovery” by the Portuguese. This will happen over three posts, so I’ll start with Salvador.

Although not being accurately correct to consider that a colony has a capital (since the very idea of capital city is related to the concept of sovereignty), the city of Salvador is usually called the “first capital of Brazil” for being more than two centuries the seat for the Portuguese colonial administration in Brazil (general government and viceroyalty). Strictly, however, Brazil only had a de jure and de facto capital since its Independence in 1822.

The Portuguese Pedro Álvares Cabral landed at what is now Porto Seguro, on the southern coast of Bahia in 1500, and claimed the territory for Portugal. In 1549, Portugal established the city of Salvador, on a hill facing the Baía de Todos os Santos (the Bay of All Saints). The Dutch Republic captured and sacked the city in May of 1624, and held it along with other Northeast ports until it was re-taken by the Portuguese in April of the following year. The city and surrounding captaincy served as the administrative & religious capital of Portugal’s colonies in the Americas until 1763, when it was succeeded by Rio de Janeiro.

The state was a center of sugar cultivation from the 16th to the 18th centuries, and contains a number of historical towns, such as Cachoeira, dating from this era. Integral to the sugar economy was the importation of a vast number of African slaves; more than 37% of all slaves taken from Africa were sent to Brazil, mostly to be processed in Bahia before being sent to work in plantations elsewhere in the country.

The city of Salvador was divided into an upper and a lower city, the cidade alta (upper city) was the administrative and main religious area and it was where the majority of the population lived. The cidade baixa (lower city) was the financial center, with a port and market. In the late 19th Century, funiculars and an elevator, the Elevador Lacerda, were built to link the areas.

By 1583, there were 1,600 people residing in the city, and it quickly grew into one of the largest cities in the New World, surpassing any colonial American city at the time of the American Revolution in 1776. The state was also the last area of Brazil to join the independent confederation; Some members in the elite remained loyal to the Portuguese crown after the rest of the country was granted independence. After several battles, mostly in Pirajá, the province was finally able to expel the Portuguese on July 2, 1823, known as Bahia Independence Day, a great popular celebration. In the state there is an ongoing discussion about the exact moment of Brazilian independence, because for almost all “baianos,” it really happened in Bahia with the battles, and not on September 7th, when the Emperor, Pedro I, declared independence. 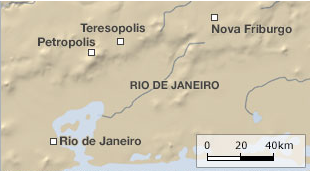 Itaipava is a word you may see when traveling to Brazil, mainly in Rio de Janeiro. In the Tupi-Guarani Indian language, it means “rock that cries,” such as in the picture above.

In Petrópolis (city of “Peter” after the emperor Dom Pedro II), North of Rio de Janeiro, you will find the Petrópolis brewery which makes a Pilsener called what else but Itaipava (my favorite), which is also the name of a district of the city. If left with pouco tempo (little time) to spare in Petrópolis, don’t waste it on getting wasted…instead go see the Summer home (or Palácio Imperial/Museu Imperial) of the second Royal Emperor to Brazil (as seen below). Following it is a picture of the district Itaipava.