An audio version is available on the link at the bottom.

“Brazil’s economy is growing at an astounding rate, and many expect the country to soon become an economic superpower. The recent success has even begun to spread into Rio de Janeiro’s notorious slums known as favelas. Some residents say movies like City of God or tours that highlight the poverty and drug trafficking in Brazil’s favelas don’t give the whole picture of what life is like here. Inside of Rocinha, one of the largest and most notorious favelas, the government estimates that there are now some 5,000 locally owned businesses.

“People think that there are only dirty and uneducated people here,” Eduardo Casaes, a lifelong resident of Rocinha who serves as a liaison between his community and the Rio government, told PRI’s The World. “But we have jobs, it’s really a middle class neighborhood. People go to work and children go to school here.”

The main problem with Rocinha and other favelas is their infrastructure, according to Casaes. Buildings are dilapidated and the streets are narrow and clogged with motorbikes and pedestrians.

Other people believe that Rocinha’s layout actually works to their advantage. Carlos Roberto de Azevedo, who owns two minimarkets in the favela, told The World, “There are a lot of opportunities for various types of businesses, because it’s a very concentrated area with many people walking around. There’s a lot of demand for different types of businesses.”

More and more companies are trying to get to consumers, according to Andrea Gouvea Viera, a city official working closely with the Rocinha community association. “But we still have a problem,” she says, “that’s the security, and we still have a problem with the trafficked drugs.” There are also problems with people illegally tapping into energy supplies, and tax evaders in an almost exclusively cash economy.

Local business people, however, dismiss these problems. Minimarket owner Carlos Roberto de Azevedo says the setbacks and reputation shouldn’t prevent outsiders from setting up shop. He points out that a Brazilian franchise restaurant opened up a while ago and it hasn’t had any problems. He says:

It will help the favela’s image if more businesses come here. Nothing bad has happened to the restaurant, it’s never been robbed. Companies and banks need to stop being afraid of opening businesses here. PRI’s “The World” is a one-hour, weekday radio news magazine offering a mix of news, features, interviews, and music from around the globe. “The World” is a co-production of the BBC World Service, PRI and WGBH Boston. – Source

I’d like to talk a little about an organization working out of Rocinha in Rio de Janeiro, who is helping to redefine the way favelas are looked at by bringing in volunteers to work within them. Through two institutions, the Two Brothers Foundation and the Two Brothers Institute (called the ‘2bros’ and ‘i2i’, respectively), the organizers and volunteers have the opportunity to redefine their vision of poor communities in developing nations as well as directly affect the communities themselves. According to 2bros, here’s a little of what they do in their own words, taken from their ‘About Us‘ page…

“The mission of Two Brothers is to provide educational opportunities in neighborhoods such as Rocinha through local and international community service and cultural exchange.

Of course, one of the strongest and most important aspects of 2bros/i2i continues to be the intimate interaction between scores of international volunteers and researchers who come to live and work with 2bros/i2i in Rocinha and students and other residents of the favela. Over the past twelve months alone more than 100 people from around the world have volunteered their time and skills with Two Brothers. These dedicated men and women, along with the students and staff of i2i, help make our organization a sort of “organic university” in which the educational experience goes far beyond book leaning and the confines of the classroom into a firsthand, lived contact with the complex and intensely human realities of the lives of everyday people. It is difficult to calculate the enormous value and far reaching benefits that come from such an exchange. On the one hand, this exchange creates a tremendous flow of information, experience, and perspectives that enrich the lives of the volunteers and those of the residents of Rocinha alike. On the other, it contributes greatly to the general understanding of the profound humanity of people living in poor communities like Rocinha and helps raise consciousness about issues of social exclusion and violence in Brazil an around the world, as volunteers and researchers pass on the knowledge they gain through word of mouth, the dissemination of the audiovisual material they produce, and the publication of research results coming out of their intense interaction with their students and neighbors.” 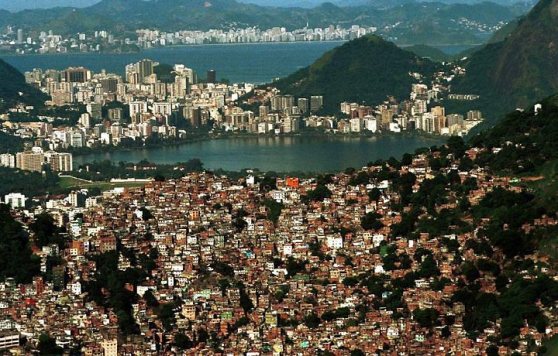 To get a closer look at the day to day activities of 2bros/i2i, check out their Photos & Videos page, which houses several thirty minute videos on the subject. I reccomend checking them out as they will change your impression of how the favelas are (as opposed to how they are portrayed in international hits such as Cidade de Deus).

One of the people bringing awareness to the 2bros is DJ Zezinho who I’ve met here in California a few years back. I spoke with him recently and although he doesn’t remember me, he got a chance to tell me of his day long tours of Rocinha which can be set up by contacting him on his site. Another interesting character is the Aussie Tahnee who has been living in Rocinha for almost a year and started a fashion line called Hijinx, which showcases clothing made inside Rocinha itself.

Here’s an idea of where you could be housed, if you volunteered with 2bros and wished to live within Rocinha in order to get a firsthand experience.