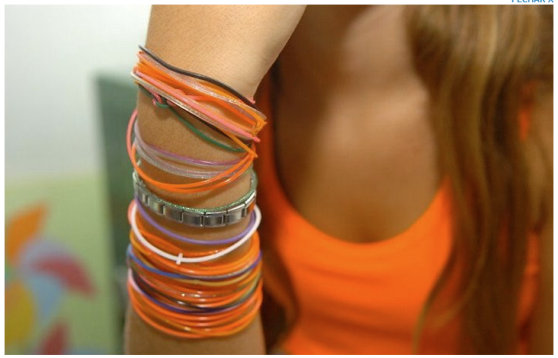 I found this to be quite new, strange and sad. Apparently, kids in school in Santa Catarina are using colored bracelets called “pulseirinhas do sexo” (little sex bracelets) and according to the game that revolves around them, if someone else can rip off a bracelet of a certain color, they win anything from a simple hug to a sexual act by the girl wearing it. Back when I was in school, we had to walk 10 miles in the snow….oh nevermind.

Here’s the story in Portuguese.

“German immigration to Brazil started in 1824 — just after Brazil won independence from Portugal — as a result of Brazilian Emperor Dom Pedro I’s (1798-1834) need to populate uninhabited regions of the huge country. Such regions were being disputed with neighbouring countries such as Argentina and Paraguay. Uruguay was just becoming independent. Those countries were by then former Spanish colonies, as all of South America was becoming independent, and all of them were interested in receiving European knowledge, expertise and labor.

Some Brazilian states received higher inflows of Germans than others. Such was the case in Rio Grande do Sul, where the first “wave” of immigrants was settled in the 1820s. In 1827, a group of Germans migrated to Brazil from the region of Trier. This was the first official German migration to Brazil. Part of this group (mainly Catholic married men) came to the farm called “Fazenda Guarei,” which is today a small town in the state of São Paulo called Guarei. These Germans are considered the founders of Guarei. 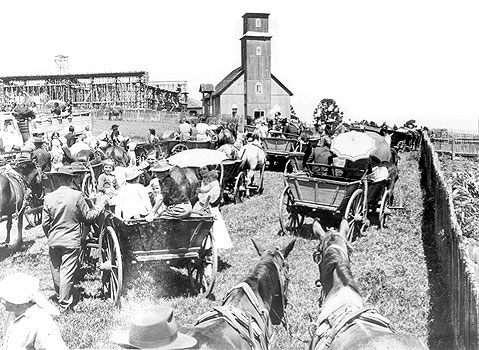 A second “wave” went to Santa Catarina in the 1850s, but also to Rio de Janeiro, in smaller number, mainly to a city called Petropolis, where the Emperor Dom Pedro II’s summer house (nowadays the Imperial Museum) was located. Other German immigration waves occurred in the 1890s, as well as after the First and Second World War. The latter emigres were not necessarily only refugees, but also people who were tired of the war. They had different destinations: to the states of Sao Paulo, to Paraná, and to the other Brazilian states.

In the mid-to-late-19th century, many German-Russians migrated to the state of Paraná, more specifically, to near Ponta Grossa city, in Campos Gerais region (a savannah). After a failure in wheat cultivation, many re-emigrated to Argentina or the USA.

On August 12, 1950, five hundred Donauschwaben families were invited to immigrate to the region of Entre Rios (Portuguese for between the rivers) in the highlands (1200 meters altitude) of the state of Paraná. The first settlers arrived at the port of Santos, Brazil in June of 1951, settling in Entre Rios with the intent of growing wheat. The area was not prepared for cultivation, there were no buildings at all, nor were settlers exactly welcomed. Rattlesnakes roamed the country. Every couple was assigned 15 hectares of land, with an additional 8 for each son or 4 for each daughter, and a house of either 72 or 42 square meters depending on family size. House and land were assigned on a loan basis; repayment to occur in about ten years time.

The first church was erected in 1957-8. The chief town is Vitoria, others in order of their founding are Jordaozinho, Cochoeire, Socorro and Samambaia. The towns were named for the previous owners of the land, which the settlers were helped to purchase by the Swiss charitable organization Europahilfe.

During the 1960’s, many of the settlers returned to Germany or Austria. Forty-two families left in 1963 alone. As of 1992, only about 5% of the original houses still remained, the rest having been replaced by more permanent structures. About 2,000 of the settlers and their descendants still make their homes here, continuing to speak the donauschwäbische dialect.

Paraná and Sao Paulo have also seen a large number of German immigrants. Through the years, the descendants of these immigrants have spread out to other Brazilian regions, yet the states of Rio Grande do Sul, Santa Catarina and Paraná are known for their concentrations of German descendants, while in other states there are rather “pockets” of them in cities such as Sao Paulo (capital of Sao Paulo state) and Petrópolis (Rio de Janeiro state).” – Source

It’s important not to forget what is happening in Santa Catarina and the people who go on living hungry, homeless and in mourning. Get Brazil has a video link to an in-depth report (in PT) on the destruction and how the country is coming to the aid of the areas in need. Even if you don’t understand Portuguese, the images are worth taking a look at.

Nossas Andanças has some information on how you can help (also in PT), and if you would like to leave a message on her blog, she can tell you in English what you can do.

The main points of the video on Get Brazil, aside from covering the damage and the aid, also cover the business side of things and how industry has come to a standstill due to two factors. The first factor being that the port of Itajaí, which normally brings in USD $33 million worth of commerce per day and employs 14,000 people is not functioning because of the damage to the port and areas surrounding it. The second factor is the human side of the equation, where those affected are trying to save their families and their homes and therefore not being able to go to work.

“Rescue efforts are being stepped up in the southern Brazilian state of Santa Catarina, where floods killed 122 people and forced 78,000 from their homes.

The federal government and other states are sending aid, including helicopters to reach stranded residents.

The heavy rainfall of recent days also caused landslides that have destroyed homes and blocked roads in the region.

Eight towns have been cut off by the flood waters while more than 160,000 people are without electricity.

Heavy rains have affected large parts of southern Brazil but Santa Catarina has borne the brunt of the bad weather.

Detailed map of the region

A Civil Defense official, Robert Guimaraes, told AFP that “nearly 80% of the region is under water,” though levels were dropping.

Eight towns have been completely cut off, while transport throughout the state has been paralysed with roads blocked by mud and water.

Emergency workers have been using helicopters and boats to try to reach those left stranded.

Civil defence officials said that, of the people known to have died, 13 were in the town of Blumenau, while another 15 deaths were reported in Ilhota. The death toll is expected to rise, officials said.

One rescued Ilhota resident told Globo TV that it was a “tsunami of clay, mud and trees”.

Josiane Malmann, who was rescued by helicopter with about 200 people from Ihota, said: “Many people and children died … The hills all fell in an avalanche.”

(Joinville is one of the towns affected by the flooding)

A state of emergency has been declared in Santa Catarina and President Luiz Inacio Lula da Silva has offered federal help.

“Almost all the deaths were caused by landslides that left people buried in their own homes,” said Santa Catarina Governor Luiz Henrique da Silveira.

In total more than a million people are said to have been affected by the flooding.

The floods have also caused part of a pipeline carrying natural gas from Bolivia to Brazil to be shut, cutting supplies to Santa Catarina and the neighbouring state of Rio Grande do Sul.”

Article above taken from BBC.

Here’s a Reuters video of the devastation and audio (in Port.) of an embedded reporter who says the scene in Blumenau is reminiscent of a war film. Click here for photos of the floods sent in to BBC.

I’ve never learned how to surf, nor skateboard or anything of the sort, but I do love being in the water, near the sea, sun and sand. There’s a certain admiration I have for those that do surf the big waves and if I had to guess, its probably analogous to riding a motorcycle (which I have done a lot of).

Here’s some info on Florianopolis (or Floripa, as those in the know call it) and it’s surfing culture.

The economy of Florianópolis is heavily based on tourism. The city has 42 pristine beaches and is a center of surfing activity. VEJA magazine, a Brazilian publication, named Florianopolis “the best place to live in Brazil.” As a result of this publicity, Florianopolis is growing as a second home destination for many Paulistas, Argentines, North Americans and Europeans.

Most of the population lives on the island’s northern half. The southern half is more isolated and less developed. Many small commercial fishermen populate the island. Although originally settled by the Portuguese (from the Azores), the city has a strong German and Italian influence, like the rest of the state.

The island is generally considered to be blessed with the best and most consistent waves in Brazil, and in early November of each year hosts what is currently South America’s only ASP (Association of Surfing Professionals) World Championship Tour professional surfing competition. Brazil has played host to many an ASP tour event over the past 30 years. Former contest sites include Rio de Janeiro, Barra de Tijuca and Saquarema, but the past four years have seen the tour set up shop in Florianopolis. Falling towards the end of the tour, the past few years have seen several ASP world champions crowned in Brazil. In 2004 it was Andy Irons, and in 2005 it was Kelly Slater (who had his 2006 ASP World Title already stitched up by Brazil).

NEXUS is a Florianopolis surfing vacation company whos site I recently ran across and I must say, its very well done. Seems like they know what they’re doing and have experienced people throughout their company, not to mention they are in one of the most awesome spots in the world for surfing.

If they have a Surfing for Dummies course, I’m sure to be signing-up next time I’m there!

“Having chosen Florianopolis as its home base, Nexus is able to offer not only world-class surfing with tons of variety and incredible consistency, but also dining, nightlife and extreme sports options to rival those found anywhere else in the world, all in a backdrop of breathtaking natural beauty and exotic Brazilian culture. Thus the concept of the Brazil Surf Experience™, which is designed not only to be the ultimate surf vacation, but in addition the chance to experience the many wonders that Florianopolis and Brazilian culture have to offer.”